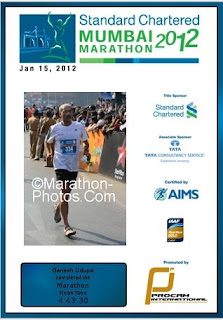 Preparation for the 9th edition of the Mumbai marathon 2012 was hard as any other marathon training. This time I was determined to break the 5 hour time and the outcome was good, in fact better than I expected, a 4:43:30 finish.

Here is my story – starting the day before at the EXPO or lack of it at the WTC on 14th Jan 2012. The fanfare of 2010 was lacking but was soon made up when friends got to meet each other. I saw Parom, Ravish, Srinivas V, Deepak and of course Doc (Rajat). There were other familiar faces from Bangalore too.

In the Q for the bib, I made friends with a 56 year old watch man (security guard) who trains 2 hours a day and was waiting in the que for his HM bib.


Server Crash!
8 out 10 times I have the innate ability to crash systems by just being present at the head of any service queue – be it at the bank, ticket counter, checkin counter and this time it was no different – the BIB server crashed but did come back quickly and the wait was not painful thanks to my newly found friend who kept me entertained in chaste hindi. Armed with BIB #334 I was on my way back.

At Churchgate met my old friend Renu after gap of almost 11 years, chatted for a while over a Rava Sada Dosa and soon, I was back home for some additional carb loading.
Slept early, Z..z..z..z…z, slept well.

3:00 AM 15th Jan
Got up early, Ravi made some great coffee, I followed it up with a small oatmeal breakfast. Got dropped off at Santa-Cruz station. Sat on the bench, at platform 2 waiting for 4:10 local for Churchgate, which came on platform 6 – rushed along with a co-passenger to 6 and we got talking to each other. The co-passenger, Samir Singh, casually inquired about my Vibrams and how long it lasted. His questions and interest indicated he was a runner and later turned out to be a runner whose personal best was 2:58 and was gunning for the first place in the open category. The guy was simply amazing – he trained 6 days a week and always ran S’Cruz to Churchgate and return!
Samir and I walked to Gate 4 the entrance to SCMM 2012 – soon met a friends and it was time to head for the start point.

5:40am …….the race begins
It was a cool morning, I guess around 19 deg-C, and hoped it remained that way for long…Srini and I started to trot at an easy pace, I lost him some where at 3k…. I reminded myself about my race strategy – a simple strategy, 70 min per quarter of a marathons, keep it slow and steady, walk the hill and if I was over the Kemps corner hill within 4 hours – plan was to give it my best shot.

As planned I hit the 5k mark within 0:34 met Chids on the way – chatted for a while and moved on, met Meghna on the way and soon hit the 10k at 1:04 almost on schedule. Met Narayan (Chandra’s cousin), who was supporting the RunnersHigh, and thanked him for being there for us. So far, so good, another 5k and we see the Chandra who had enough stuff there to open a mini restaurant. Hit the 15k at 1:36.

Aha, the Sea Link starts – as we approached the middle of the Sea Link bridge – we could the sun rising on our right – that was indeed a great view with the profile of the city in the foreground – wish I had a camera. Soon hit the 21k mark at 2:12 (3 minutes less than plan). Met my cousin, Ranga, who was struggling with some cramps, ran a bit with him. Renu came all the way to support me at the HM point, shook hands with her and caught up with Ranga. Soon, 25k mark approached at 2:37. After the 25k mark my pace started to deterirate a bit, I tried to pick it up with some strides within about 5 minutes. I started to get some pain in the right quad, making it difficult to raise the leg. Soon, saviour Chandra was in sight with RELISPRAY, what a relief. Speed kills, bad idea stick to the slow pace is what I kept reminding myself….at 3:13 I was at the 30k mark.

I was eager to ensure I was at 36k by 4 hours, curtailed any thought of speeding up, just kept chugging along, all along the 30k to 33k, I kept eating ground nutchikki (for those in the west, a kind of granola bar, but a lot cheaper) and hydrated myself well for the hill at 34k.
Walked the uphill and what a relief hit the 36k mark at 3:58, was elated that a sub-5 was now a reality, at the same time did not want to spoil that by changing pace on the downhill – resisted any increase in pace, just relaxed going down hill and kept the pace easy upto 38k…in 4:13
4.2k to go, 4:45 finish looked feasible and doable, even if took 30min for the balance distance. I kept the pace steady, taking every ICE station/sponge station as an opportunity to cool the legs a bit….that helped…soon the 40k mark approached me at 4:28, I knew I was home, but was patient and now wanted the sub 4:45 and went for it…… soon the I see “1K to go” board and it felt great then a bit later saw 500m to go, then 300m, then 200m and then 100m was elated and very please to finish 4:43:30

Thanks to all my friends/coaches at RunnersHigh and last but not the least Veda, Saru and Ravi who were by my side to support me to achieve the goal of a sub-5 hour marathon.

The big Thank you to the Mumbai crowd who came out in large numbers with water, biscuits, chocolates to support the marathoners. Jai ho Amchi Mumbai.

By the way this was my first full marathon in Vibrams!

The Naupachis Blog is about short travel stories - the famous Train 2427 Rewa - New Delhi SuperFast Express was responsible for initiating this blog. Why Naupachis ? well, Pannera asked the Ticket collector - What times does this train reach Kanpur? and he replies "NauPachis" not knowing a word of hindi Paneera understood "NauPachis" as "No Purchase" and was wondering if this has to do with purchase of tickets! that is when we thought "Naupachis" be a good name for this blog. Whose Paneera? Well, those who travelled by the on return train from Kanpur know it....